Follow-up to Sid Meier's legendary early flight sim F-15 Strike Eagle from 1985. For the sequel, he teamed up with Andy Hollis to create yet again an outstanding flight simulation that perfectly balances arcade and simulation elements. It could hardly be described as a hardcore simulation, but it's a fun action game in a solid flight sim environment.

F-15 II offers four difficulty levels to choose from, with missions set in four theatres of war: Libya, Persian Gulf, Vietnam and Middle East (without the scenario disk). Most missions are laid-out in the same way: there's a primary target and a secondary target. Your mission is to destroy them both and return home in one piece to your air base or carrier. Of course, destroying any other enemy targets during your flight doesn't hurt and will earn you a higher mission score. Score means promotions and medals.

For a simulation, the game is very simple. There are only three types of weapons you can use, two for air-to-air combat and one for air-to-ground attacks. Killing targets is very often just fire-and-forget, the flight model is simple and straight-forward. Graphics are very nice for its time and there's even some in-game speech through the PC speaker or adlib sound-card. Overall, a solid arcade-oriented sim with a steep learning-curve, not very realistic but fun. A classic.

Note: In 1991, a scenario disk was released called "Operation Desert Storm". It added three new scenarios, two from the earlier F-19 Stealth Fighter, North Cape and Central Europe and, of course, a completly new scenario based on the Persian Gulf War called Desert Storm plus night missions, improved sound support and new weapons. This add-on is included in the download zip below. To install it, first install the game, then copy all files from the add-on archive over the old F15-II directory. 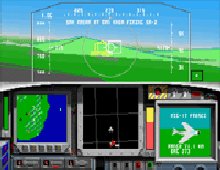