Fairly good formula one racing simulator that comes with a handy track designer. Unfortunately, it was released around the same time Geoff Grammond released his racer Formula One Grand Prix, which made everything else look like a little beetle in pink pants - bad luck. However the track editor in Grand Prix Unlimited is still useful and innovative, and the overall feel is okay. BUT the controls in the game are far too sensitive on anything better than a low 486 - which makes the game nearly unplayable on today's computers (same problem as with Test Drive III). A slow-down util can help. Doesn't the (annoying) music in this one sound very similar to the on heard in TD3? 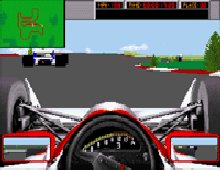