Ferrari Formula One is a decent F1 racing game from Rick Koenig and EA that offers a good feel for the event - but pales beside Accolade's Grand Prix games in terms of realism and options. As description on MobyGames puts it: "...you are to drive and win the Grand Prix. But before you do, you will have to pick the track you want to race, test your car and adjust it to optimum performance." An average racing game that doesn't have anything to set it apart from other, better games. It is also probably too easy for racing sim fans who love the challenge of MicroProse's World Circuit. 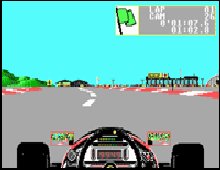