I may like a lot of old racing games, but this one is definitely one of them. The game lets you play a one or two player game; single race, practice or championship on all the tracks that existed in 1991; qualifying session. So what's bad about it? Gameplay! The game is simply too easy and, unfortunately, dumb and you will most probably give up on it after a few races.

Too bad, this could have been a good game. Play Grand Prix Cycles by Accolade instead, it's a lot more fun.

Microids' Grand Prix 500 2 is a fun motorcycle racing game that boasts vibrant graphics and smooth animations that are better than average for its time. In many ways, the game feels like an update of Broderbund's 1987 SuperBike Challenge, in that it includes all 12 of the world's Grand Prix courses, as well as a 2-player hotseat option. The game does strike a territory of its own, though, with the overhead display of course map that makes it very easy to see your position in the race, as well as track layout. Unfortunately, this reduces the action display to only one-third of the screen, so the "you-are-there" feeling is greatly reduced. Another weakness is that the game is very easy-- I know next to nothing about motorcycling, yet I managed to win 4 races in a row without much hassle from computer opponents. I suspect that this has to do with very lenient car-handling mechanics, as I was able to accelerate constantly, and no inertia was ever felt even when I slow down and accelerate immediately again. The game is also very forgiving when it comes to crashing: you can fall down when you bank far too low in a tight curve, but this incident is few and far between.

Overall, Grand Prix 500 2 is a fun diversion that soon becomes quite boring as you leave the other bikes far behind in the races. A decent game with some good features, but without any long-term play value due to easy (or lack of) car physics and absence of challenge.

Very good bike game wich you can play alone or with two players on one computer. The game looks and is quite simple with some nice options.

This is a nice motorcycle game in which you can practise, race and even race a championship on 12 different tracks. Gameplay is ok, You just must get the hang of it. 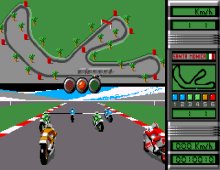 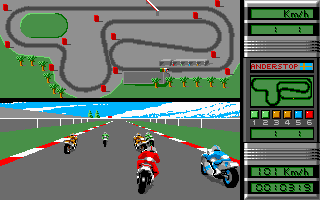