After revolutionizing the 3D dungeon romp genre with Ultima Underworld and its sequel, Looking Glass Technologies turned their attention to the genre that is the perfect match for their powerful physics engine: flight simulation. And so we have not just a good flight sim, but one that sets new standard in the genre: Flight Unlimited, released in 1995. Its sequel, Flight Unlimited II, sets even higher standards than its predecessor as an ultra-realistic civilian flight simulator that makes the comtemporary version of MS Flight Simulator (the 1998 version at the time) look like child's play by comparison. Excerpts from the Adrenaline Vault review explains why:

"Instead of focusing on a relatively small geographic area, and the aerobatic abilities of stunt planes, Flight Unlimited II focuses on the challenges of civilian flight in and around the San Francisco Bay area. Unless you begin a "Quick Flight" from the game's main menu (which immediately thrusts you into the cockpit of a chosen plane), Flight Unlimited II's main interface is the FBO, or Fixed Base of Operations. The FBO is your home away from home; it is your little piece of whatever airport you are currently in, and acts as a sort of headquarters. There, the player can access the flight planner, select a plane to fly, "sign up" for a flight lesson, and choose any other option available in the game. Although the FBO looks different depending on the airport or airfield, the theme is always the same -- adventure. This element permeates the entire game, and is important to mention. Flight Unlimited II sort of takes place in a parallel world, one where the romance and intrigue of flight have been perfectly preserved. Every FBO is something out of a 1930's adventure movie, complete with large oak desks, rolls of curling maps, and the ancient but essential teletype machine. The ambiance is perfect, and you can almost see Humphrey Bogart or Gary Cooper in the long, sun-borne shadows.

There are five aircraft available to fly in Flight Unlimited II, and each has its own unique challenges and features. The Trainer 172 is a basic, single-engine aircraft commonly used for training new pilots. It's relatively easy to fly and has great maneuverability, making it the perfect "starter" plane. The Piper Arrow PA-28R-200 is a common civilian aircraft, and the next natural step up after the Trainer. The Raytheon Aircraft Beech Baron 58 is a sleek little plane, and offers a lot of horsepower when compared to the Trainer or Beech baron. The Beech Baron seems more suited for business than pleasure, and you can really imagine yourself delivering a cargo of powerful executives to their all-important meeting in San Fran. Probably the most challenging plane to fly in Flight Unlimited II is the P-51D Mustang. This came as a real surprise to me; after owning the skies in my Mustang in games like Aces Over Europe, I found flying the same plane in Flight II to be a whole different experience. Effectively piloting the Mustang really is like controlling a wild mare; this baby bucks and recoils like an untamed beast, and if you don't hold the reigns with a feather touch the wings will rip right off. How's that for realism? Although the P-51D is great fun to fly, my personal favorite is the DHC-2 De Havilland Beaver, the only plane that can land on and take off from water, something not offered in Flight Simulator '98. Because of the inclusion of the Beaver, water is Flight II has been realistically modelled. Any plane other than the Beaver (okay, and sometimes the Beaver too!) that hits the Pacific or any of the smaller bodies of water will actually sink beneath the surface.

In addition to those elements already mentioned, each plane also has operating challenges specific to that type of aircraft. For example, when flying the Piper Arrow, fuel must be distributed between two tanks every 75 minutes of flight time in order to keep the wings balanced and prevent flaming out an engine. In the Trainer, the pilot must allow the heated air from the exhaust manifold to warm the carburetor, in order to prevent icing of the carburetor inlet and subsequent engine failure. These subtle, yet important differences really help differentiate each aircraft, and make flying each one a totally unique experience. That in itself greatly expands the title's gameplay.

Even though the player of Flight Unlimited II has the entire San Francisco area to explore, there is another gameplay option available other than simple free-flight. Clicking on the teletype machine in any FBO accesses the game's "adventures," pre-scripted scenarios that truly put the pilot to the test. These adventures tell the story of the unsung hero -- the pilot who does all the work and gets none of the glory. Remember Indiana Jones' friend at the beginning of Raiders of the Lost Ark? You know, the pilot of the seaplane who rescues Indy from the savages? Well, imagine being him; he's got a daunting task, but gets none of the credit. In Flight II, the adventures come in all different varieties. My personal favorite involves flying a darkened Beaver in the dead at night to Alcatraz, with the insane intention of breaking out two gangsters. I'd be lying if I said my palms weren't sweating while I made the 25 minute flight to the Rock, and silently touched down on the clear water. Okay, so my plane sank as I was "driving" around looking for the dock, but I was proud just to have gotten that far! One of the adventures even emulates the famous WKRP stunt of dropping a planeload of turkeys over a stadium on Thanksgiving. Good luck clearing the bleachers -- I couldn't quite pull it off....

There's a lot to like in Flight Unlimited II, and very little, if anything, not to. While the area surrounding San Francisco obviously isn't as big a geographical area as that offered by Microsoft Flight Simulator 98, ie. the entire planet, it never becomes an issue. Flight II's gameworld is so detailed and so very much alive that there's always something to do or see. Actually, the size of the game's geographic area ends up being perfect. The player can fly between two major landmarks in about a half hour, which also seems to be the standard approximate time for all the adventures. Sure, it would be great to check out the sights in Japan or Australia, but would you really want to sit at your computer for the time it takes to leave the United States and fly to foreign locales? In Flight Unlimited II the player really does get to experience the sheer joy of flight, and enjoy the journey...not just the destination." 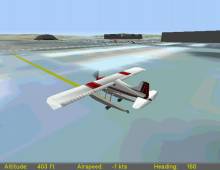