Airline Simulator 97 is a superb passenger airplane simulator by an Italian developer LAGO. Thanks to an agreement with subLOGIC right before they were bought out by Sierra, LAGO was allowed to include parts of subLOGIC's famous Airline Transport Pilot (ATP) in Airline Simulator 97. The program simulates 747-400 airplane with the original subLOGIC flight model, featuring European scenery that can also be used with ATP. You have access to dozens of primary airports around USA and Europe, and over 300 secondary airports with a total of more than 700 runways. You can even fly to the overseas airports of Boston (USA) and Toronto (Canada).

For the first time ever, Airline Simulator 97 allowed armchair pilots to fly in real-time-continuous flights between New York and the other US/Canada airports and all the European airports. In addition to offering a staggering degree of realism subLOGIC fans are familiar with, Airline Simulator 97 also includes Airline Simulator Interactive Manual (ASIM), a powerful program that teaches you how to use the simulator, operate the glass cockpit, print the approach charts, print a quick reference chart, and print parts of the instruction manual. The interface of ASIM is available in English, German, French and - of course - Italian. If you have even the slightest interest in civil aviation, Airline Simulator 97 is well worth your time. 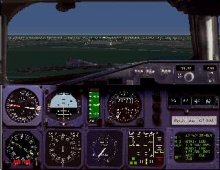