Flight Assignment: A.T.P. (short for Airline Transport Pilot) from SubLOGIC is a classic civil flight simulator that was a breakthrough in the genre in many ways. For starter, the game offers a very vast scope: you can fly from different cities in either the US or Canada, such as Toronto International to North Bay or Montreal or Chicago, or all the way to San Diego (SAN) using the appropriate airways of course. The game lets you choose from Boeing 737, 747, 767, and Airbus A320, each of which is realistically modelled. The scenery files are very accurate, and you can even be directed by a real ATC voice. More than a decade after its release, ATP remains the most accurate commercial and private pilot flight sim ever made. If you are a die-hard flight sim fan, this is a must-have. You can read the detailed history of how the game came to be, and how it is related to Microsoft's Flight Simulator series here.

Note: Pro Pilot, released by Sierra in 1999 after it acquired subLOGIC, is an excellent update of ATP. Since Sierra has discontinued the game, though, you can check out instead Airline Simulator 2, a complete update of ATP based on an earlier remake by LAGO. This old game adds three new aircraft (MD83, MD88, and B747-400) to the original classic, with new graphics, flight models, and scenery. Airline Simulator 2 is an immersive flying experience that includes 96 flights in Europe as a part of your "career" as well as more in the North Atlantic and the USA. 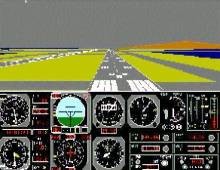