Thalion's A320 Airbus is a highly realistic passenger airline simulation - one of its kind ever made. The game is perhaps best described as a more "micro," hands-down version of Air Bucks, with more emphasis on flying passenger planes than business planning. As a game developed in cooperation with Lufthansa and Deutsche Airbus, two of Germany's biggest airlines (which explains why the game features these companies' planes and logos in abundance), A320 Airbus is a serious simulation in every sense of the word. Cockpit instruments are complex, and flight dynamics are arguably much closer to reality than early versions of MS Flight Simulator. Anyone who wants to try a fun, accessible airline management game should stick with Air Bucks, but fans of Tracon and veteran pilots will have a good time piloting passenger aircrafts in this overlooked sim that enjoyed mild commercial success on the Amiga. 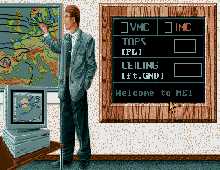