Flying Saucer is one of the most original flight sims ever made, but was unfortunately never released because developer PostLinear went under shortly after finishing the game. Instead of the usual fly-the-modern-jet theme, Flying Saucer lets you play an alien ship-- something many flight sims fans always wanted to try ;) And this is no arcade game, either: the alien ship is carefully modelled, with reasonable flight dynamics and difficult handling that takes some getting used to. The story, although very far-fetched, sets the stage nicely for the game: your girlfriend is abducted right before your eyes by a menacing alien ship, which takes off and disappears into the night. You have no choice but do what every desperate boyfriend must do in such a situation (imagine heavy sarcasm here): sneak into ultra-secret Area 51 in a remote desert, and steal one of the flying saucers that the US government is hiding from public. Your task is to learn how to pilot this goofy-looking ship (flat, saucer-shaped-- coming straight out of the '50s movies), and track down the dastardly ship that kidnapped your girlfriend. Of course, the government is now hot on your trail as well....

Although the saucer looks like a simple frisbee, it takes a lot of patience and effort to learn how to fly properly. Since apparently no one has flown one of these things before in real life, the designers took some liberties in imagining how the saucer might work. It feels reasonably realistic, with enough "alien" touches to add to the atmosphere. One advice from me: overcorrection means near-certain death in the game. Trust me ;)

The fun doesn't stop at flying the saucer. Inside the dull grey exterior are cool alien gadgets, including lasers, missiles, targeting equipment, and a unique control system that gives you good reason to make use of the training mission before getting your hands dirty doing what flying saucers do best: abducting rednecks. Yes, you can abduct people and other things, and the ship's computer will even analyze what you successfully abduct. The descriptions are a lot of fun, and add tremendously to the game experience. Although the game is mission-based, you have reasonable freedom to roam around nice 3D landscapes in most levels, abducting everything in sight ;)

Overall, Flying Saucer is definitely a fresh breeze in the flight sim genre. You don't have to be an aviation nut to get any enjoyment from scaring the locals with your alien presence, although aviation nuts will find some reasonable realistic touches that keep the game above being a mere shooter. Missions are nice and varied, and the cartoon intro and cut-scenes are very well done.

Note: Although a CD-rip version exists when the game was "leaked" to various warez groups, the full CD version was never seen-- until now, that is. 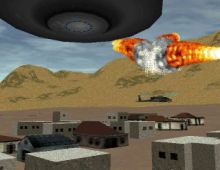