Football Glory is an interesting Sensible Soccer clone that falls far short of that classic due to insipid gameplay and poor controls. The game offers many options, from World cup to European championships through to domestic leagues. You can even edit your own club and create your own leagues/cups with as many teams as you like and either play against the computer or against your friends.

Developer Croteam at the time set out to challenge the then mighty Sensible Soccer with improvements to the tried-and-true gameplay such as bicycle kicks, an after touch, and a lot of other features. It is in the humor department, though, that Football Glory truimphs in, with many funny features such as being able to be sent off and punching the referee, the appearance of streakers(!) during the match, and stretcher bearers running to take injured players away.

The humor of the game, while making it very unique and appealing, can't save it from poor controls and gameplay-- computer AI is sorely lacking, as the computer will choose strange strategies that lead to easy victories for you. Still, Football Glory is a good choice if you don't want to spend ages mastering a football game, or want an easy challenge. Unfortunately, because Sensible Software threatend court action over copyright, Football Glory was never further developed. 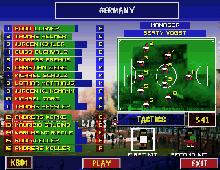