Seems like the guys at Krisalis are United fans. Heh, no problem. Liverpool still has more trophies... Anyway, this is a management/action football mix. You are a manager of the team you select but you also have to buy/sell players, select tactics and play through the seasons. Not as good as the good ol' Championship Manager but not bad as well. The actual part of the game where you play the match could have been done better while the rest is pretty much ok. Football management fans should try this game. It's not bad at all.

Not a very impressive football but many of the games developed around a popular club or player are often not very good. This is also often seen with golf and racing games as the publishers mostly sell the game because of the famous name they associate with the game - and in this case the popular English football club Manchester United. Even as a huge fan of the club I just don't like the game even if I really want to.

But if you don't take that into account the game it does several good features not seen in many other football games. These features include an editor so you can edit most of the details in the game. Furthermore you can also make your own leagues to make the game a bit different. Of course I consider it most funny and realistic as well to just play a regular season instead. When you do that you can play as any team you want to. Of course you can also just play a single match and of course both against the computer and another human player.

Both the interface and actual game match engine have quite good graphics with well done details as well. Of course it doesn't look like any of the FIFA games from EA Sports but it does look decent taken the little budget the game had. Overall not a special football game and unless you are a football fanatic you probably won't find this game very interesting.

Don't get fooled by the name - you can choose what team ever you like. Well... you ARE limited to teams from the first 5 english divisions though - makes a pretty good selection if you ask me. I - being a fan of Jürgen Klinsmann - chose Tottenham Hotspurs. Well - now the game begins... you got some limited manager functions (which I mainly ignored) and you're also responsible for the job of the coach. You nominate the players, tell everyone where he plays and - most important - you play. That's the center of the game and in my opinion you got one of the most enjoyable football games here. It might not reach the class of Sensible Soccer and it's successors - it's however easier to get into and while it takes some practice to actually score a goal even with limited experience you can still be pretty successful in defending.

The game got a kind of unusual isometric view which I liked - it's easy to get into - and you can mostly ignore the stats of the players. The only I really found important was speed. Get a good fast attacker and get the ball to him. You can get along with that recipe pretty well. Klinsmann scored many goals for me... to be precise... he was the only one in my team who EVER scored a goal. Might have to play a little more, but then again - that's his job. :)

This is not the most complex football sim, it might not have the most advanced controls, not the latest cool realistic 3D action graphics or whatever. It is a good mixture though and especially if you aren't that great at playing football games you can get a lot of joy out of this one.

Manchester United - The Double is successor of Krisalis' well-regarded Manchester United Premier League Champions, and arguably the best in a Manchester United-licensed trilogy that began with Manchester United Europe. Third time is indeed the charm, as Krisalis adds an isometric view, transfers, a full team editor, an updated team data, and more options that make the management aspects of the game much stronger.

Gameplay hasn't changed much from its predecessor, with just the addition of a very elementary management facility. It still has the excellent Tacti-grid(TM), which is one of the best ways ever of positioning your players. Additional manegerial options make the game more similar to Premier Manager series, although not as complex. The new isometric view of the game (which looks remarkably similar to Kick Off 3) is a nice touch, and controls overall are intuitive. The game will even let you edit everything (including player stats), and the computer AI is quite competent. Overall, the best game in Krisalis' football series. Although not a true classic, Manchester United - The Double is Top Dog material that will keep all Manchester United fans (and enemies) happy for hours as they work their way through the Coca Cola Cup and various other tournaments. 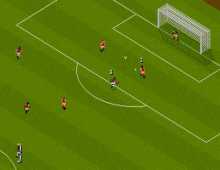