One of the most underrated soccer games, MU:PLC is an excellent game that combines good strategic options with fun arcade-style top-down play similar to Sensible Soccer. As the title suggests, the game focuses on the British divisions, where you lead a team of your choice through the season and Premier Cup finals. Player ratings and formation do make a difference here. In all, a solid game... just be prepared for some tough games if you do NOT choose Manchester United, whose players are semi-gods judging from their ratings G. If you like the game, also try Manchester United - The Double, the last and arguably best game in this series. 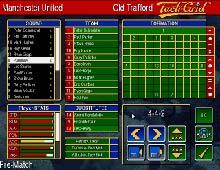