One of the most obscure football (soccer) games ever made, Manchester United is the world's first PC game based on the famous British club of the same name. The squad's exploits are depicted quite faithfully in the PC version, and while the game is nowhere near the caliber of classics like Kick Off (particularly because it is hard to score goals, and very difficult to tell players apart), it still is a better-than-average football game that casual fans will enjoy. Here is the excerpt of the Amiga review from Zzap! magazine that can easily be applied to the PC version:

"...There's a bit of managing to do via the icon-driven menu system. Each member of squad has a position and several individual skill ratings. Players aren't set in their abilities though: you can use the selective training option to improve each of six attributes. Of course, no amount of training will be enough for some old snoggers (Bryan Robson? - Phil) so they can be sold and new players bought via the transfer system. You can attempt to buy any of the players on the transfer list or make a bid for those not listed although they're likely to cost more. If another club makes a bid for one of your players you can accept, refuse or even insult the chairman if it's a derisory offer!

Before the next league match the team must picked along with one of five formations. The arcade section is then multiloaded in. Matches are viewed from overhead (on the C64) on a scrolling pitch with the teams kicking left/right. On the Amiga [as well as on PC - games] it's a side-on view. Both United and the opposition can be player- or computer-controlled.

Players dribble automatically and shoot when the fire button is released - the strength of kick determined by the time fire was held down. In addition you can chip the ball by pressing fire again quickly afterwards. Tackling is achieved either by running into the ball or by doing a sliding tackle. If mistimed the latter can lead to a free kcik: players can get suspended for bad fouls while their victim may be injured. Both free kicks and corners can be accurately aimed by moving a cursor where you want the ball to land.

Game options allow you to change match duration, adjust computer skill level for United and opponents, and turn the management section off. The two-disk Amiga version has been around some time now. Identical to the C64 in management mode apart from the digitised piccies of the United players, its elevated side-on view of the action also features a radar scanner and a set digitised 'action replay' when a goal is scored.

[This] game oozes glitzy details, with a ref, linesmen, players taking goal kicks and even poorly digitised 'replays'. But the colours used are awful, they really are very bland indeed, while gameplay is unremarkable. Scoring goals is very tough and the game doesn't compare well with Emlyn Hughes for playability." 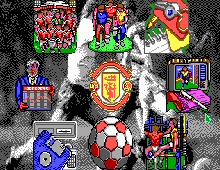