Goal 94 is probably the only text based football manager game I really like. It features some really unique things like overall team rating, a great way to show each teams strength compared to other teams etc. The match engine is not very good and it contain a rather annoying sound through the PC speaker. Of course you can turn this off and you can also speed the game up, so it won't take that long to play a match.

Every season several players will stop their career and new players will get up into to your B team. This is another good thing in the game. Goal 94 offers many things which haven't been made in other manager games but it still misses something before it can be considered a very good manager game. 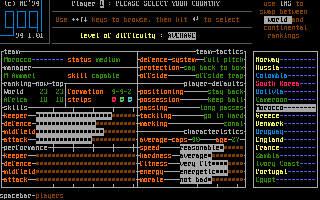