This is probably the best soccer game ever made (with all respects to FIFA series by Electronic Arts). Play as almost any team in the world or try yourself as a manager in career mode. The game is pretty simple - control the player with arrow keys and shoot/pass with ENTER, that's all. But...the game ain't easy, trust me. Sometimes You'll lose a game to an inferior team and sometimes You might even beat much stronger one. That's what makes the game even more interesting. Career mode is superb. Start in any club, be the best You can and You might move to stronger and better (and richer) team. Buy players, play in Euro cups... The best one ever made!

Rated as one of the best soccer games in the first half of the 90's. In Sensible World Of Soccer you can play both as a manager and a player. You can choose to play in almost every leaague including the biggest European leagues, Brazilian league and many more. The match mode is almost the same from the games before all though it's a bit tougher to win the matches, which only makes it more realistic.

The graphics in the matches are great and overall the game includes a great interface with a lot of different options like player transfers, player stats and much more. So if you like both manager and footbal games this might just be THE game for you.

The best Soccer-Sim I EVER encountered! Hundreds of teams - national- and league-play, all the true players of the 95/96 season. It's all there! Plus the ingenious gameplay of Sensible Soccer (they seem to have improved it, though I can't tell what EXACT it is they've done). New in this version are the extended possiblities you have as a coach - including buying new players with different skills and so on. If you're looking for a soccer-sim: your search is over - you'll find no better! Get it!

This 95/96 version is an update of the classic Sensible Soccer action-oriented soccer game, this version sports sharper graphics, updated teams information, and more weather conditions you can choose from. As in the original, SWOS delivers a furious action on the pitch, with intuitive controls of tiny players that allow curve balls and bicycle kicks. Choose from a staggering number of league and national teams to compete in major tournaments. Highly recommended! And if you love the game, be sure to check out SWOS 96/97, the best game in the series -- also on this site, of course ;) 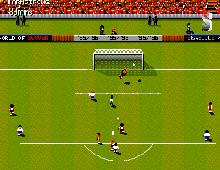