A "sequel" of sorts to Sensible Software's 1996 Sensible World of Soccer, a great conversion of the company's famous Amiga football (soccer) game. Based on the teams that played in Euro '96 tournament, SWOS: European Championship Edition sports new features that make the game even more addictive than SWOS, including the ability to pull off looping headers and curved passes, trial players, international management, and more charming cartoony graphics such as animated crowd and goal celebrations. Like its spiritual predecessor SWOS, the PC version of SWOS: ECE features digitized match commentary and funny animation sequences (unfortunately missing from this CD-rip due to space constraints).

The game itself remains what SWOS is, and more: a very addictive football game featuring tiny players, top-notch feel of the game, and excellent management options (although that is never the focus of this series) to round things off. Anyone who prefers "realistic" players such as motion-captured 3D models of current football games might be disinclined to try the game, but if you are a real fan of the sport, you will recognize after a few minutes how authentic SWOS: ECE feels, despite its cartoony players. You need to dribble the ball for real in this game - it doesn't "stick" to your foot like in FIFA. This, plus a staggering range of moves and shots you can do, make SWOS: ECE much more fun than most other football games in the market.

Released right before the 1996 European Championship in England, SWOS: ECE was a great PR move by Sensible Software and a superb game to boot. But since everything in the game would be included and surpassed in the 96/97 edition of SWOS (which you can also download from this site), there is little reason to play this game - except if you want to see what an "intermediate" game between the original SWOS and SWOS 96/97 looks like. And then of course if you are a die-hard Sensible fan, you'd need this to complete your library of this wonderful, yet woefully underrated, football series that was much more successful on the Amiga. 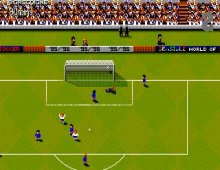