F1 Manager 2000 from Intelligent Games is a decent F1 manager game that unfortunately was too bug-riddled in the first release to pose any real challenge to the superb Grand Prix Manager 2 game from Edcom/MicroProse. The game lets you manage an F1 team from the 1999 season, putting you in control of every aspect of the business from negotiating with sponsors, developing car components, hiring employees, to testing, car assembly, and pit stop strategies on the circuit. All tracks, sponsors, drivers, teams and employees have their real names and pictures in the game, thanks to licenses acquired by the developer.

F1 Manager 2000 offers a 3D view of the race which is quite exciting to watch. Called the "TV view," this gives an impression of watching a live-TV broadcast, except here the cars move faster ;) Once the race begins, you can manage pit stops and your driver's aggressiveness level. Real-time statistics on lap times, tire wear, and other parameters let you keep a close look on how well the team is doing. One nice touch is the excellent distinction between drivers and cars: two drivers will likely demand two different setups even with the same car. Hakkinen and Coulthard, for instance, like their setups completely different even if they were in the same team.

Unfortunately, there are too many idiosyncracies, bugs, and flaws in the game to make it a top game. For example, in contrast to a real-life F1 race, everyone in the game drives the same number of laps. There are many other minor, but annoying, bugs in the game (the number of hours you have to practice is only one, not two as in real life). And when compared with Grand Prix Manager, this game just doesn't have nearly as many options and features, especially on the circuit. Worth a look to F1 fans, but don't expect another classic that can top Edcom/MicroProse's masterpieces. 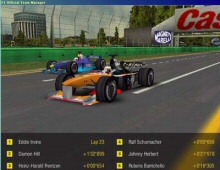