Conversion of Tecmo's arcade soccer game World Cup 1990, though the computer version has been licensed to the European Championship of 1992. It's a standard isometric view arcade style soccer game - easy, simple, as mediocre as a soccer game can get. You can choose from 25 European teams represented in that tournament, although there's hardly a difference between playing, for example, Greece and Italy (except nationalistic pride, of course ;)) If you like the arcade game, you might find this one a bit nostalgic--- although not necessary fun at all. There are simply far too many better action-oriented soccer games to occupy your time with. 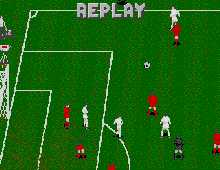