Empire Soccer is an average football game (soccer for you US people) with a different approach than many other football games like Kick Off, Sensible Soccer and the FIFA series. Of course all these other games are a bit more serious in their included features than the developers of Empire Soccer.

The biggest difference that Empire Soccer has compared to other football games is the cartoonish graphics and the overall interface where you can see much less of the football field (actually way too little) and that also means that the players are much bigger. The players though are well animated and look much better than the players in Kick Off and Sensible Soccer. What I really hated in all the other early football games and also in Sensible Soccer is that the ball was glued to the player. This is not the case in Empire Soccer though and overall the actual ball control is fairly good and only seen better in games like Kick Off (except for the heading which Kick Off doesn't include at all).

There are numerous tournaments to play as well as different difficulty selections so everyone should be able to win and then move up in levels as they improve. The controls are easy but can be redefined if needed both player 1 and player 2. Empire Soccer is overall a simple football game offering nothing new but if you like these games in general you might find the game good.

A fun and humorous soccer game, Empire Soccer offers nothing new to the genre dominated by Sensible Soccer, but still stands out with its cartoonish graphics, big player sprites that are much easier to see than Sensible Soccer's tiny men, and intuitive controls.

The one feature in Empire Soccer that deserves mention most is, IMHO, the fact that the game doesn't actually suffer from the ball-glued-to-feet syndrome so common with arcade-style soccer games. Nor, however, does it have the opposite impossible-to-turn-round problem of Sensible Soccer (in which it's quite difficult to dribble the ball consistently). Instead the game uses a combination of the two: once you have the ball safely at your feet, you can dribble away to your heart's content. However, control of the ball before that is a lot more advanced - you can trap the ball, you can head it in various different ways, you can volley it: basically almost anything you can do in real life. This welcome touch of realism is unfortunately overlooked by later games.

The game only features international teams - but that's more than enough. You get to play exhibition matches, train your team, and participate in the World Cup. The number of national teams you can choose from is quite high-- the game even includes lesser-known teams such as Latvia and Wales. Of course, you can change your formation for the game, and even select different AI's for the computer. Graphics in the game also deserve mention as a nice step up from Sensible Soccer Flags wave, fireworks burst, and when you score, you get a wonderful sequence of pictures of the scorer, the fans, and the keeper. My only gripe is the fact that passing is tough because you can't see very far up field.

In short, If you have Sensible Soccer and really like arcade-style soccer games, you will probably enjoy Empire Soccer. Arguably it's doesn't have the charm of Sensible Soccer or the versatility of Kick Off, but it offers good, clean soccer fun with an innovative ball control system. Highly recommended!

This is a very nice fun football game around in those days. With very fun graphics in stead of the 'realistic' persons used in other soccer-games. You play with one of the international teams against the computer or your friend. You can control the ball very well, well programmed! 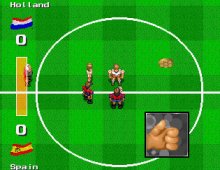 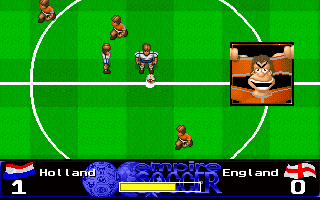