Espana: The Games '92 is a fun game based on the 1992 Summer Olympics Games at Barcelona, Spain (hence the name "Espana" in the title). Although it pales besides Epyx' more polished The Games: Summer Edition despite having the official license, Espana is still a solid sport title that offers many hours of enjoyment and replayability.

The game's strongest point is the sheer number of events. You can compete in over 30 Olympic events, including swimming, archery, and most track & field events (e.g. running, hurdles, javelin throwing). You can practice any individual event before the big tournament, or jump right in to try to win as many gold medals as possible. The game puts some emphasis on simulation aspects, as you can improve your athlete's condition through training, and tiredness level must be closely watched at all times. The choice of countries you can represent is disappointingly limited to a handful of Western nations, but at least you can choose male or female athletes. Controls for most events are intuitive, although they seem to rely too much on repeated joystick (or keyboard) clicking for my taste. The graphics are adequate in VGA, although the palette is too muted, and animations a bit blocky.

Overall, Espana: The Games '92 is a good bet for any Olympics fan who is looking for a wide variety of events and decent simulation features. For sheer playability, though, Epyx' The Games: Summer Edition or Accolade's Summer Challenge are both superior to this old game. 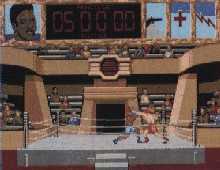