The official game for the 1988 Olympic Games at Soeul, The Games: Summer Edition brings to life 9 exciting Olympic events with the same great gameplay and variety that Epyx's 1986 Summer Games is known for, now with great graphics and even more fluid animations. As with Epyx' other games, you can practice in any event for as long as you want before choosing which country to represent in the Olympics tournament. Highly recommended! 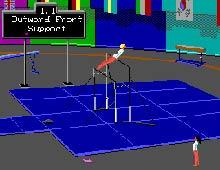