The Games: Winter Edition doesn't sport as good a graphics or gameplay as its cousin The Games: Summer Edition which was released in the same year, perhaps due to its being based on an older engine. Nevertheless, fans of Epyx' earlier Winter Games will find much to like here, as Ski Jump and Slalom -- the two best games from that version-- return with a new facelift with many other new events. 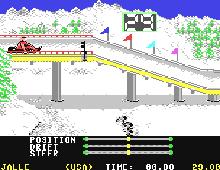