The ice-hockey counterpart to the popular soccer management game Bundesliga Manager Professional. It was done by the same people (KRON), and it shows as layout and design is very similar to the football management game. It's an official licensed DEB product, so you'll find the real club and player names. However this one was done long before the DEL existed, so there are no "Mannheimer Adler" or "Kölner Haie", but the good old club names. The game offers most of the aspects you would expect from such a game. Up to four players can take part in managing their favorite club. You'll have to take care of the team set-up, tactics, the training program, sponsors, transfers, contracts, all the financials and even your playing grounds. As in the soccer game, there's an option to turn on goal-scenes, which add to the excitement. However you can't take part in the action. All-in-all a well laid-out fun game. There are only very few similar games, so every ice-hockey fan should get hold of this one. In Germany, ice-hockey is by far not as popular as football and so the game didn't spawn endless successors as Bundesliga did. 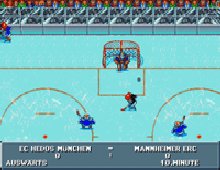