DDM Soccer '96 is a nice shareware soccer game from Digital Dreams Multimedia, a Spanish shareware/budget games developer. Although it looks merely like a budget clone of Sensible's classic Sensible Soccer on the surface (short, stumpy cartoony players), the game is a much deeper simulation once you get into it.

The game includes the same range of options you find in most soccer games including: the ability to play exhibition match, league, or cup; dozens of national teams to choose from; and various formation options. But it offers much more than that. You can change default formations manually by specifying each player's "zone of control," done by pointing the exact location in the opponent's zone you want him to run control. You can also change the color and design of your team's flag and jersey - pixel by pixel. The actual gameplay on the pitch is fast, fun, and fluid. Like Sensible Soccer, you can kick curved balls and other fancy shots. Overall, this little-known old game that was hardly marketed outside Italy is a nice arcade-style soccer game to add to your collection. Recommended! 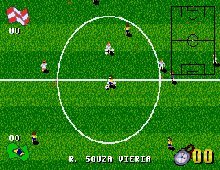