One of the best-looking arcade-oriented baseball games for its time, Data East's Bo Jackson Baseball also offers some managerial options, although not as extensive as "true" baseball sims such as Micro League Baseball. Still, it more than makes up for shortcomings as a sim by excellent user interface and graphics.

Gameplay is very basic, but then again the game never pretends to be a realistic, full-blown baseball sim. There is plenty of choices you can make on the pitch, though: you can jump and dive while fielding, and-- in a nice break away from other baseball games of the era-- move the batter around in his box to find the perfect spot. As for pitching, you have a choice of either a change-up or a fastball, and its direction. The action is fast and fun, although with only 3 stadiums to choose from and hundreds of games to play per season, the game becomes visually boring after a while.

Bo Jackson tries to appeal to the hard-core fans of baseball sims by offering you a chance to edit player's statistics, which cover over 30 categories ranging from hits to running speed. However, it becomes somewhat moot in the field since it is difficult, if not impossible, to tell exactly how those stats influence the outcome of the game. Players, for example, seem to run at about the same speed, even though their running scores are different. You can choose from a number of authentic US teams, but since everyone looks identical (except for different jersey colors), it doesn't make much difference whether you control the Mets or the Red Sox.

Overall, Bo Jackson Baseball is a solid arcade baseball game that suffers a little from trying to be what it's not, i.e. a baseball sim. It's not among the very best arcade baseball sims ever made, but it's still highly playable. Diehard fans of realistic sport sims should definitely look elsewhere, e.g. Micro League Baseball IV. 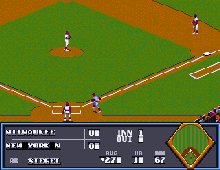