Cricket 97 is a good-looking cricket game designed by Melbourne House of Australia and published worldwide by EA Sports. Since the only exposure to cricket I have ever had was listening to a UK friend's description of a supposedly exciting world cup match, I'll leave it up to the guru at Games Domain to convince you of the game's merits:

"Cricket 97 has a whole stack load of options. Everything you could possibly imagine can be changed. You can even opt for Ozy rules for scoring as opposed to English ones. Once you?ve chosen your options, you can go for a quick match, a one day match, a full test match or a network game. You can of course have a 2 player game with one machine, so I presume the network game is for Internet users. Before the action begins you have to select the weather conditions. Once you?ve done that, Ian Botham appears and tells you all about the match conditions. Richie may pop up again and give a quick word or two. The nice thing about EA Sport ?s games is that they always get some stars in to do the commentary. Ian and Richie do a fine job and Cricket 97 is up to EA?s usual high standard of presentation.

As is the nature of cricket, you?ll either be batting or bowling. Batting is handled by the use of the directional keys and two fire button. Pressing various directions performs different shots. I found a joy-pad most convenient but you could probably get away with keys. There?s a wide range of shots and some of them are pretty impressive. The trick is to position your batsman in the right place and use the right shot for the method of bowling which the batsman is using. To be honest, there seems to be a lot of luck involved. However, if you know your cricket then you?ll love the attention to detail and will spend hours refining your bating skills. The one glaring flaw with the system is that if you perform a shot which requires you to use the down button, your batsmen tend to start running straight away. This is a bit stupid if you play a rubbish shot. You can avoid this problem with a bit of practice and keen reflexes. It?s still a bit annoying though.

Bowling is more straight forward than batting. You don?t need to remember all the different methods, you simple select how you?re going to bowl before you start. You then have to position a cursor to decide where the ball will bounce. A good knowledge of cricket will be required to fully understand how to successfully bowl, but you can always go for the ?getting lucky? method that you may have already experienced with the batsman. Fielding is fairly straight forward but can be a bit frustrating. Despite the fact the you?re dealing with national teams, the fielders can still get themselves in a horrible tangle. As well as these detailed controls for batting and bowling, you can also select your team and tactics. This adds a bit of management to the game and will please anyone who?s always winging about their national team. (i.e. usually anyone in England.)

Cricket 97 is a detailed simulation of cricket. Everything?s in there. The only slightly strange thing is that nobody ever seems to score sixes. That aside, it?s just like a real cricket match. The realism is both Cricket 97 ?s greatest strength and weakness. If you like cricket and you want a good cricket game you?ll love Cricket 97. However, if you?re not totally enthusiastic about the game of cricket, this computer game will bore you to tears. If you want a cricket computer game this is the one to buy. However, unlike soccer games it doesn?t have the appeal to draw in people who are not fans of the sport." 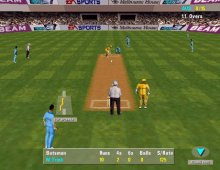