Arguably the best cricket game ever made, Shane Warne Cricket is the last cricket game from Audiogenic, makers of classic games including Allan Broder's Cricket and Brian Lara Cricket. This 1997 version of their popular game engine sees all-new SVGA graphics and many more options than before. You can choose from 12 international teams and 18 county teams, all with authentic statistics (as of 1997 anyway). There are 25 locations digitized from real stadiums, allowing you to experience the thrill of playing in various cricket grounds, ranging from Bombay to Bristol.

Like its predecessors, Shane Warne allows you to get in on the action, controlling batting, bowling, and field placing. The game is now much more realistic than ever. Pitch type and weather conditions realistically influence play. For the first time in a cricket game, you can play the complete County Championship, Sunday League, and Knockout competition. International teams can compete in a Test Series or Knockout. The option to print out scorecards - or even export them as a file - makes it easy to create your own permanent records and statistics.

On the pitch, there are also new action options. The new "Six-Hit" button helps make hitting much easier and more user-friendly. You can even use computer-generated totals to concentrate only on the aspects of the game you like the most - for example, handle batting yourself and leaving bowling alone to the computer. Intelligent computer opponents round off this excellent, and overlooked, sports title that cricket fans can't miss. A top game. 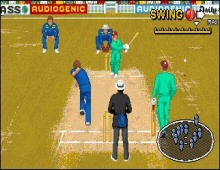