A decent cricket game by Celebrity Software featuring one of the world's most popular cricket player, Ian Botham's Cricket offers good graphics and gameplay but is bogged down by a cumbersome interface (not to be confused with a vastly superior game Ian Botham's Cricket 1996 by EA Sports). The game is easy to set up and run as a "quickie" cricket game that doesn't bother with tournaments: just pick two countries, the lineups, and go. Ian Botham features a unique split-screen presentation that lets you view the action from both behind the pitcher's back, and behind the batter's back. Although this looks great for a while, it quickly becomes confusing because naturally the players and the ball move in opposite directions in these screens. You can perform a variety of throws, but the more fancy ones are quite difficult to pull off with keyboard presses. Overall, Ian Botham is an average cricket game that doesn't come close to Allan Border's Cricket in playability or graphics. It's a nice try nonetheless, though, and the real-life rosters that include many cricket celebrities could keep fans happy for at least a few matches. 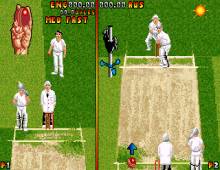