PGA Tour Golf is an excellent oldie golf game by EA. Although technically not as amazing as Access' Links, which (unfortunately for EA) came out around the same time, but PGA Tour Golf offers a tournament option, four courses to play on and better physics than the Access classic.

Among the myriad choices in PGA Tour Golf include the ability to play against a friend or computer players in tournaments to earn money, and watch a Live Score card after each hole you play. There are many practice options as well. After FIFA Soccer and NHL Hockey, PGA Tour Golf is a great start in a sport series by Sterling Silver (later absorbed into EA Sports label). The game series is still going strong, and has been recently renamed to Tiger Woods Golf. It may not be as replayable as Jack Nicklaus series for lack of design tools, but it still plays a great game of golf. Highly recommended! 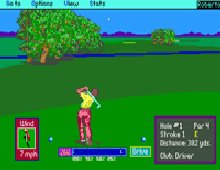