International Open Golf Championship is a solid but relatively unknown golf sim by OCEAN sponsored by Pringles (yes, that crunchy snack we're all familiar with), who also sponsor many annual golf tournaments. While there is only one course in the game, it is quite well-rendered, with good details such as trees that sway in the breeze, rippling waves, and so on. The interface is similar to most other golf games, most notably Links: you use a circular "swing meter" at the bottom right corner to swing and hit the ball. Wind direction and strength is displayed by an arrow at the bottom left at all timesóa handy feature. You can also switch camera angles to look at the course more carefully, and practice any hole before the tournament begins.

Overall, IOGC is a decent, above-average golf sim that probably won't raise any eyebrows, but golf fans who try it out will be pleasantly surprised to find an underrated sim that is very enjoyable to play, although lacking in long-term play value. 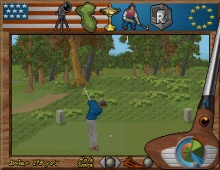