All the nice features from the previous game are still here, such as the computer-controlled players and the excellent course designer. The game comes with three courses to play on: English Tourn CC, Lorimar Resort and Sherwood Country Club. All in all a decent golf game, but by far no competition to Links 386 Pro that came out the same year, especially graphic-wise. Still, it got its following and thousands of fan-made courses were made for this game and can be found on the net. The course designer portion of the game still ranks today as one of the best ever devised. 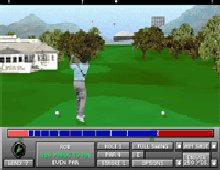