Three years after the release of RBI Baseball, commonly regarded as the best baseball game ever made for the Nintendo, Tengen made a big comeback in 1990 with RBI Baseball 2, released first for the Nintendo and later for PC. Unlike the first game, you now have a choice of all 26 Major League Baseball teams of that time, as well as the ability to use the American and National League All Star teams. Like in RBI Baseball 1 you are still allowed the option of picking your pitcher, choosing a relief pitcher and batter, and a new feature of organizing the lineup. The most impressive part of this game was its new enhanced graphics. Now the players were taller, slimmed down, and had more animation to them which made them look surprisingly realisitic. Even in the outfield they were extremely well drawn, and just looked like miniture versions of the players seen in the pitcher/batter view screen. Another nice feature was the addition of more music, as well as, music playing while you are in the game. I think the only bad part about the game was the fact that many of the poor sound effects from the first game were brought over like the pitches and scoring. Overall, RBI Baseball 2 won't appeal to baseball fans who crave a plethora of statistics and realism, but as an arcade-style sport game, it's pretty damn good. 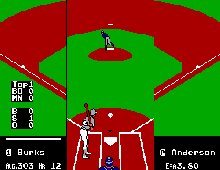