Veritech is a unique sci-fi flight simulator based on famous Japanese Macross anime series (known in the West as Robotech). The game follows the plot of Macross Plus, although not too closely.

As in the anime, the Veritech fighter is one of the most powerful ships in the terran fleet. But before you can fly it, you have to complete a training mission which gives you an understanding of the game's controls and some combat experience. Training commences on Ataia Island, where the Macross space carrier crash landed 10 years ago. After a long period of repair, the Macross is ready to make its maiden voyage, but the Valkyrie pilots must be in top form before it goes anywhere. You are, naturally, one of those pilots.

In the training mission, you will fly mock battles with other Veritech fighters, as well as Cyclone ride-armors, and destroy bombing targets and follow nav points. After you have completed you're training and have a basic understanding of the ship and combat controls, you can then go on with the real missions and advance further in the game.

One of the things I thought are unique about this game is that, unlike other flight/space simulator games that I've played, your ship is very powerful, and can transform into a jet once you have lifted off the ground. If it's not in the jet form, then it is a mech with wings-- the familiar form of Veritech craft that Macross fans will instantly recognize. The graphics in Veritech are very good too for its time, similar to the graphics in Elite or F-15 Strike Eagle II. There is some Soundblaster sound in the game, but most of the sounds are through the tinny PC Speaker. For the controls, you can use keyboard, mouse or joystick, though I found that using the joystick was the easiest method. Overall, Veritech may not boast the most realistic flight dynamics or the best graphics, but if you are looking for a flightsim with a difference, then this one fits the bill. And Macross fans will likely drool over possibly the only PC game based on the anime ever made. What's even more remarkable that the game was designed solely with Simis' Flight Sim Toolkit application, with custom-made graphics and many serious tweaks. 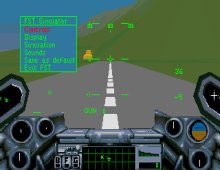