Two fun arcade-style single-ship simulations from Magic Bytes, USS John Young 1 and 2 are short on realism but long on old-fashioned fun and attractive graphics. Taking place in a hypothetical modern day, the games offers only 4 missions to choose from, ranging in difficulty from easy to difficult: convoy attack, platform attack, submarine attack, and battle fleet war. The only difference between them is in the number of enemies, and the type of target you must destroy.

In a novel twist to the genre, you can choose battle locale after choosing a mission. There are four areas you can choose, including Falkland Island, Tanazu, You can also choose whether to engage in a nighttime or daytime battle. This gives the game a total of 4 x 4 x 2 = 32 different missions, although as mentioned above, they are not very different from each other. Still, both games are fun arcade-ish sims that will appeal to novice action gamers, but definitely not armchair naval commanders. The colorful graphics, especially good rendition of enemy ships, and multiple weapon stations make the games ideal for anyone who likes Gunboat but want a bit more depth. USS John Young 2 is an improved version of 1, but with little difference in gameplay or graphics.

Note: In a curious programming decision, the games also uses their own mouse driver, forcing you to disable your own before starting the game (in Windows 95/98 terms, that means playing the game from pure DOS only). 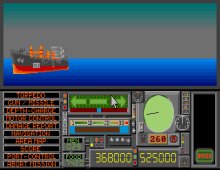