One of the most unique flight sims ever made, UFO lets you pilot a flying saucer from outer space (although the picture on the box cover looks more like a stealth fighter to me). The game description on MobyGames says it all about this intriguing title that unfortunately looks better on paper:

You control a UFO (with controls unlike those in any earthly vehicle), careening and skidding around the earth under the power of standard thrusters or a gluon disruptor propulsion system, avoiding detection by humans (you can use your translucer to become radar-invisible), in a search for fuel for your species' galactic ships. You can return to your mother ship and trade your scavenged fuel for additional supplies. (Your mother-ship docking tractor beam can also be used to capture earthly aircraft... hmmm...)

The controls are akin to (but different from) a helicopter's. You can control the amount of anti-gravity; you can pitch, roll, and yaw; you can thrust back and forth, up and down, and side to side. (Thrusting up and down is preferable to the less precise use of antigravity - important while docking.) For advanced flying, it is possible to use anti-laminar transducers to completely eliminate drag (important to keep your hull from overheating), and use the aforementioned gluon devices to "fly" forwards (but watch out for spinout!)

There are other options available, including landing pods, illuminator beams, probes, gravitons, shields, teleportation. UFO is also compatible with the subLogic Scenery Disks."

When the novelty wears out and after you have fiddled with all the options, UFO becomes a more or less standard flight simulator that is just a bit harder to get a hang of than earthly vehicles. It's still quite a lot of fun, though, and the conjectures and assumptions subLOGIC uses for the physics model are quite impressive and reasonably realistic. Recommended! 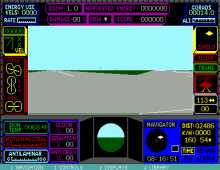