One of the first entries in Electronic Arts' successful flight sim series and the first flight sim to be released on CD-ROM, U.S. Navy Fighters is a fun flight sim that may disappoint die-hard armchair pilots due to its arcade-ish gameplay. Games Domain's review says it all:

" USNF provides you with six aircraft to fly in 50 pre-built missions, a campaign mode using these missions under aircraft and weapons inventory constraints, digitized movies of each mission's briefing and network news clips, and a mission editor so you can design new missions. Your flyable mounts include the F-14B, F-18D, A-7, F-22, Su-33, and F- 104 (included for nostalgic reasons). Of course, the carrier wing and other forces add many more aircraft from A-6Es and E-3s, to Mig-29s and An-74s. Each aircraft has different sensor, engine, and weapons capabilities thus influencing how you fly, fight, and land each bird. Ground stuff includes the standard tanks, triple-AAA, bridges, apartment buildings, and so on. Sorties range from fleet defense and long range interception, to down and dirty ground pounding or snake hunting (SAM suppression).

USNF has a very good mission planner and designer. During a mission briefing, you have control over waypoints for your fight and the default altitudes, speeds, and formations for each waypoint. You can even specify certain tasks to be accomplished at each waypoint for your flight: SAM suppression, defend other friendly aircraft, intercept nearby enemies, and so on. However, you only have control and knowledge of your own flight so you can't, for example, assign Iron Hand aircraft to preceed you to a target.

Don't let the easier-to-handle technology fool you into thinking the combat is like an arcade game. Flight models for each aircraft have been done quite well, as have the weapon models. You will have to fly good tactics to get your kills. Review energy management, weapons envelopes, and comparative turning performances before entering combat if you want to live long. Enough wingman commands are provided to help you delegate work to your tag-along.

I have found the enemy aircraft artificical intelligence to be rather clever (although, like all other sims, below human ability). Opponents with better thrust tend to seek safety above you, and rarely do they bleed off excessive amounts of energy. Once in a while, I have seen what I think is an attempt at a bracket, too. A split-s, yo-yo, or snake are common maneuvers. Friendly AI on the other hand, leaves much to be desired. My wingman often tries to leave our patrol area and attack a bandit a hundred miles away or ground targets that are not part of the assignment. Nobody, including your own navigator, seems to be able to calculate bingo fuel levels properly. You receive little to no AWACS directives, and your task force repeatedly lets the enemy get way too close before launching you for defense. All in all, your side is not fighting the war very intelligently.

Missions are flown all times of day, and while a good story threads all the missions together for the campaign (a Russion coup- surprise!), the mission tree is strictly linear. If you screw up a mission, it is assumed other aircraft have succeeded where you have failed and the campaign goes on as if you had won (you'll still even get the same medals!). However, should you fail five missions or be killed, you'll have to start the campaign over.

The high resolution, rich sound, and mission variety make this sim worth every penny. However, USNF lacks the avionics simulation and graphic artistry of older sims and as such may be overtaken by future high-res, digitized-sound versions of Falcon and Fleet Defender when (if!) they are released. But for now, USNF is a heck of a ride!" 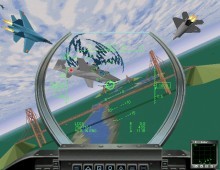