Super EF 2000 is the last game made by Digital Image Design (DID), one of the most venerable flight sim companies before it was bought out in 1997. The game is the excellent graphical upgrade of DID's earlier EF 2000 v2.0 for Windows 95, which puts you in the cockpit of the EuroFighter, one of the world's most sophisticated fighters.

The excellent graphical details that DID is famous for are more breathtaking and smoother than ever in this old game. The scenery does not magically bend and distort as you fly closer to it. Numerous details, such as diamond shock-waves from the afterburners as well as visual distortion from the heat, are accurately modelled in the game. You can even see the cockpit glow from the external view. From the pilot's seat, you can zoom out and get a wide angle look at the instrument panel, HUD, and terrain. You can even see yourself reflected in the cockpit's canopy! Cloud tops are true to life and reveal a cobalt blue sky that darkens with altitude. Missiles or planes that strike the water make plumes of white mist, not repetitive and unrealistic orange explosions a la Wing Commander. Even the runway environment is accurate, as are the runway lights.

The game world is more dynamic and varied than previous DID games. Combat can take place at night, day, storm or clear. You have a small but comprehensive range of wingmen commands for combat, formation flying, tactical and recovery. Training missions have been well laid out and they are recommended (although I can never get the hang of in-flight refuelling). Tactics do make a difference in this game, as you have the choice to influence the outcome of the campaigns based on your performance.

In every respect, Super EF 2000 is a must-have for every serious flight sim fan. It's a sadly forgotten old game, and will keep armchair pilots happy for months on end. 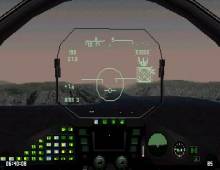