Speedhaste one a very well done racing game. Great graphics, easy controls, well done tracks without errors and good competition. This is the short description of the game but since the game is quite simply there aren't many details to go into.

There are several different tracks you can race at, some of them more advanced than others. The first one you start at is simply a circle you drive around in so not that many challenges since you have pretty much lost if you crash. This track is great in multiplayer though as the car that is behind is always faster than the leading which makes it challenging no matter how better one of the human players is compared to the other one. This setup is also the same as the one that are around on the arcade machines you might have seen in your local shopping centre or a similar place.

Another good thing is the well done controls that can't get much simpler - not even if you are playing more than one human player. The graphics are excellent and there are some well done animations if you crash your car. And you will since you really have to learn the different tracks since some of them have different paths depending on which corner you decide to drive down at. The sound could have used a bit more work but it's easy to live with it because of the rest of the good things in Speedhaste. A recommended racing game.

Speed Haste is a very simple, flawed shareware arcade racing game that allows you to race the F1 or Stock Cars around a variety of circuits. The usual arcade options are here: select your car from different car models, choose whether to use automatic or manual gears, etc. Although the graphics are much better than average, the driving model is extremely unrealistic. For instance, your car can slide through most corners flat out if the correct line is taken. Joystick controls are awkward and unresponsive, and I've found the keyboard to be the best way to play. The AI is quite stupid, if it exists at all-- computer-controlled cars follow their own route without caring about where you are. This leads to some interesting games of pinball: bouncing of backmarkers as you try to pass.

What saves the game from mediocrity, fortunately, is the excellent network play mode. Four players can link together and race on a standard IPX network, and it's a lot of fun. Since people can pick up the game very quickly, and any slip can lose you seconds, close races are the norm. The appalling AI and exceptionally slow CCs make Speed Haste too easy to beat for most experienced drivers, but if you have friends to play against, it's a blast. Recommended for multiplayer mode, and anyone who likes easy racing games. 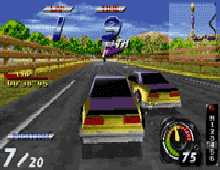