Renegade: The Battle for Jacob's Star

The Battle for Jacob Star is the sequel to SSI's early classic Renegade: Legion Interceptor based on FASA's Renegade Legion RPG universe. The game is unfortunately not as good as Legion Interceptor, partly due to SSI's decision to turn the game into a space sim instead of a turn-based strategy game like the original. The review at MobyGames summarizes the pros and cons of this approach:

The Renegade Legion universe gets a second spin in this sequel to the original Renegade Legion: Interceptor and this time has a little more depth because you run through a story as opposed to the random mission generator of the original. This universe has a lot of potential going for it and it's good to see another attempt at it. For a fan of the board game/original game, it was almost as much an enjoyable experience to fly the various Commonwealth fighters as it was to fly an X-Wing. The graphic style, which is has a serious-cartoon appearance, is fitting enough for the universe and defines the various characters adequately.

Unfortunately, this game came out on the heels of Wing Commander 3 and TIE Fighter, two exceptional entries in the space dogfighting genre. Without anything to compare it to, Jacob's Star might have been a decent to good game in many people's minds, but TIE Fighter was flawless in its sleek gameplay and nothing looked as good the very story-driven Wing Commander 3. This game feels more of a hybrid of X-Wing and Wing Commander 2. The in-flight graphics are incredibly simple and, while they serve their purpose, don't stir any excitement. The controls are sloppy and far from the fluid feel of the more professionally done games. The AI is also fairly weak. Finally, the storyline is hardly the best written, and the voice-overs do not lend anymore credibility to it.

A mediocre action 'flight' sim based in the Renegade Legion universe. While the universe is splendid, the flaws and inferiority of the game compared to the games of the same period make one wish SSI had just done a true, turn based strategy sequel to Renegade Legion: Interceptor, rather than turning it into a flight-sim game." 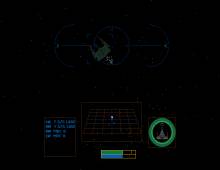