This is another sadly forgotten classic-- similar to its descendant-in-spirit Sub Culture, Subwar 2050 casts you as a young submarine pilot who work for a global conglomerate in the earth's far future. You must contend with both undersea creatures and subs from opposing corporations while taking on missions that range from simple delivery to seek-and-destroy. The graphics is way ahead of its time, and the physics of undersea combat is well-implemented. The expansion disk adds 2 additional campaigns, new terrain, and many more enemies. 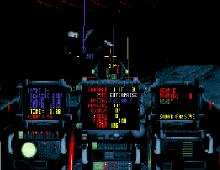