Sub Culture is THE best underwater simulation game I have ever played, bar none (well, except for Archimedean Dynasty perhaps). In the spirit of mercenary games e.g. Privateer, Sub Culture is an open-ended game allowing players to accept missions or just explore their surroundings. As a freelance mercenary running dangerous missions, you trade goods at the various cities and-- on the side of course-- bring peace to your underwater world where a nasty war is raging between two undersea nations Procha and Bohine.

Trading is integral to the game, as you must earn cash to upgrade her equipment. You can make money by prospecting for ore, pearls, and scrap metal, or by completing the missions that advance the plot, which starts off interesting but gets even better as time goes on. What qualifies this game as a simulation rather than trigger-happy action game is the fact that all objects and creature have been designed using realistic physics models which affect movement through the water. For example, if you stop your sub, you'll drift. This can make it difficult to accurately line up targets, but at the same time it really makes you feel as if you're moving underwater. If your joystick supports force-feedback, the game provides near-perfect immersion: you'll feel collisions shaking the ship and explosions rocking your little sub. All in all, Sub Culture is a wonderful underwater simulation that is even better than MicroProse's underrated SubWar 2050. It might disappoint arcade fans due to some "lull" periods of relative quiet as you navigate to the waypoints and just taking in the amazing surroundings. For the rest of us, however, and even for reflex-impaired people like me, Sub Culture is a must have. Highly recommended! 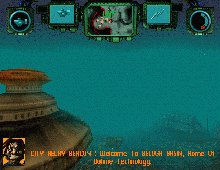