Based on an excellent but little-known FASA boardgame of the same name, Renegade is a ship-to-ship space combat simulation that was among the first games to feature turn-based gameplay combined with real-time simultaneous execution of combat. Choose between single-player and two-player hotseat, and create your squadron to take on increasingly difficult missions in the war between the Terran Overlord Government and non-human Commonwealth. A great variety of weapons and other gadgets to outfit your ships and a versatile custom ship builder module make up for the game's lackluster AI and repetitive missions. Overall, a great game for fans of FASA's RPG universe, and a much better game than the mediocre flight-sim sequel Battle for Jacob's Star released years later. 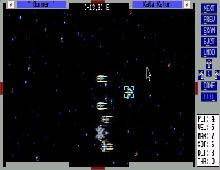 People who downloaded this game have also downloaded:
Warhammer Epic 40000: Final Liberation, Reach for The Stars, Romance of The Three Kingdoms 4: Walls of Fire, People's General (a.k.a. Dynasty General)