"A tactical simulation of trireme warfare; an often-ignored subject in wargaming, the treatment herein rendered it hors de combat." There's not much more I can add about the game-- like Avalon Hill's other early fumbles, this game is primitive, inexplicable, and simply not fun. If you're interested in the subject matter, play Wooden Ships and Iron Men instead. 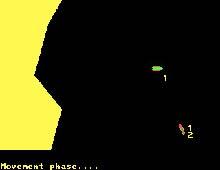