This update of Chris Crawford's seminal Balance of Power for Windows 1.0 features up-to-date information, 18 new countries (bringing the total to 80), and "multipolar level" in which countries can go to war of their own volition (you could, of course, take advantage of the situation by selling them arms or contribute troops). Perhaps as a response to players' complaint of the steep learning curve of the first version, Chris added the "Crisis Advisory Board" who would give you advice during the crisis. Overall, an excellent update of the best cold war simulation ever made, here compiled and patched beautifully to run under Windows 95/98 by our resident cracker Mok. There's no better geopolitical game on the market, even a decade after its release. If you have even a slight interest in politics, this game is a must-have.

A reworked version of the 1985 release which has now has 82 as opposed to the original 60 countries and you now have 4 advisors. Not the easiest game to get into though persistence will reap rewards. Playing 2 or 3 turns can take an hour or more due to the amount of info you have available to check before making your decisions. The game was designed for the Mac and this shows in the gfx which are virtually the same on the Amiga. So one for the strategy fans, certainly not for those who want flashy gfx or the casual gamer. 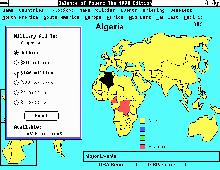