An intriguing-- if a bit too esoteric and confusing-- political simulation, this game lets you become the U.S. President who must maintain approval rating (ahh-- that penultimate goal of presidency ) and deal with global crisis. Decide on national budgets, monitor nuclear threats, give foreign aids-- it's all in a day's work.

It is apparent that Shadow President designer, Robert Antonick, tried very hard to counter the conventional wisdom that political simulations are "dry" exercises that are best left to Cold War historians and statisticians. They have largely succeeded: although there is still a huge number of statistics and reams of text to pore through, they are presented in an attractive, graphical style, with neat animations. Summary statistics for each country, for example, is presented as an isometric city, with each section representing basic categories. Many skyscrapers mean that the country has a big population, while the number of nuclear symbols signify their nuclear capabilities. When you launch a nuke toward a country (be wary of a huge drop in approval rating when that happens!), you will see that same isometric landscape obliterated in the familiar mushroom cloud. There are also many clues to help you get your bearings in this potentially intimidating environment. You can consult an array of advisors on policy issues, and consult the CIA World Factbook-- the entire text of which is included in-game, and forms the basis for much of the global crises and situations you will need to deal with. With a solid economic, diplomacy, and political models, attractive graphical representations, and many "real-world" options and policies, Shadow President ranks as one of the best games of its kind ever made.

The game begins with a tutorial for those new to Shadow President. As the leader of the United Stares of America, the most powerful nation on earth, you have the entire planet at your fingertips! It is up to you, with the advisory of your cabinet, to make crucial decisions that will either make or break you. You are not limited to what you can do in the big seat.

Every choice the real president makes is now in your hands. The question is, what kind of a leader will you be? Will your actions lead to a utopian society and everlasting world peace? Or will you turn out to be a ruthless tyrant that rules his dictatorship with an iron fist and plunges the world into nuclear war? How you play the game is up to you! Although the primary objective in Shadow President is to promote diplomacy, when I play, I nuke countries I don't like, just for the hell of it (and that's what all the fun is about).

The graphics are something like those on the SNES, but this is a game that doesn't attract its players with good graphics, but with the complex challenges it presents. However, that is perhaps the biggest downfall to Shadow President: not enough action. None whatsoever! This game impresses me as being educational as well as strategic.

In order to play, you must first print out the "quotes sheet" on one of the files that download with the game, and enter in the name of the famous person being quoted in the DOS prompt. If you like games that challenge your mind without all blood and gore of other strategy games like StarCraft, this is the game for you! It is definitely worth a try. 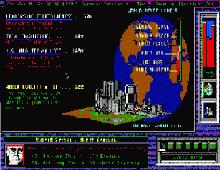