Crisis in The Kremlin

Here's your chance to prove Gorbachev right -- or wrong. Your initial choice as either Ligachov, Yeltsin, or Gorbachov affects your initial posture in domestic and foreign policy which you can adjust at any time. As with other political sims, the goal here is to be in power the longest without being thrown out by opposing parties. It's a solid sim, although replay value is limited because many crises (e.g. 1986 Chernobyl disaster) do not vary from game to game. Recommended for everyone interested in cold-war era USSR or real-world politics. 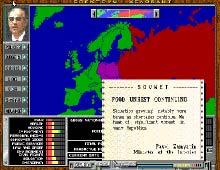 Crisis in The Kremlin screenshot