One of the most comprehensive political simulations ever released, Power Politics puts you in command of a US presidential campaign. In contrast to the realism of SSI's excellent President Elect, here you can run many what-if scenarios, pitting, for example, John F. Kennedy against Ross Perot. After choosing 3 candidates (Democrat, Republican, and Independent), plan your campaign in detail for each major *town* in every state, including what issues to tout in advertising and debates. There are reams of statistics to please all but perhaps the candidate himself, and you can even hire a spin doctor if the campaign is going badly. 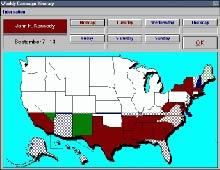