Balance of Power is among the first political simulation that emphasizes diplomacy and politics over outright aggression. When he first released this seminal game in 1984, Crawford single-handedly established the political simulation genre and left a lasting legacy on how to design good diplomatic models in a game that gives a nod to reality. You must use diplomacy, make treaties, issue risky, covert CIA or KGB actions, or riskier, direct military intervention to prop up 3rd world countries or help their insurgents and win them to your governmental philosophy: Capitalism or Communism. The game, not surprisingly, attracted many non-gamers to the field and inspired countless books on the subject. International cold war politics at its best! 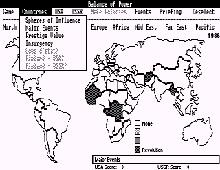