Pacific Strike is based on a similar engine as Strike Commander. In this game, you play a naval aviator during WWII in the Pacific Theater of Operations. You begin your career during the surprise attack on Pearl Harbour, and then continue your career sailing through the Pacific Ocean in your effort to bring the war back to the Japanese homeland. During your cruise, you will be performing strike or escort missions. Unlike in Strike Commander, you will have more liberty in planning your missions. You'll even be able to choose what plane to fly when you have attained a high enough rank. Pacific Strike have a very familiar feel if you have played Roberts' other sims. The story is intertwined with the actual history of the Pacific Air War and, combined with the very well done history-section of the manual, gives you a fairly good atmosphere.

Graphically, this sim is richer than its much more popular contemporary, Microprose's 1942 Pacific Air War. Graphical effects like tracer fire, and black/red outs are very well done. But as far as gameplay goes, I have little to recommend. The flight modelling is questionable. This does not only mean that it is simplified. It IS questionable. This, and other historical inaccuracies, will surely put off realism-buffs. Sadly, action-oriented player will also be put-off by the sluggish flight model. If you want to experience air combat over the Pacific, you'd be better served by Dynamix's Ace over the Pacific or, even better, by MicroProse's 1942:Pacific Air War Gold. 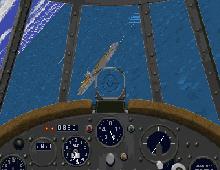 People who downloaded this game have also downloaded:
Wings of Glory, Aces of The Pacific, Strike Commander, Red Baron