Unofficial sequel to great Starflight series, Protostar was brilliant in 1993, with it superior, 256 colors VGA graphics. Featuring more massive plot than original games, and also ability to land and actually visit alien cities and trade there, it was far more advanced than ever. Protostar came almost unnoticed though, as 1993 was year of Privateer, and as always happens with games (and movies) the bigger fish won. More than enjoayble 8 years later, with full soundblaster/adlib support, it most certainly deserves to be named classics of the gaming.

Protostar stands out as one of the better games Tsunami produced in their short career. Designed by Starflight designers who intended to market the game as Starflight 3 but could not win the rights to the name from EA, Protostar is a fun space trading / exploration game that's set in the grand Starflight tradition, although unfortunately it was much less well known than the predecessors -- Tsunami was not allowed to use Starflight name, since it is a trademark of Binary Systems/Electronic Arts.

Despite the lack of name, Protostar more than deserve to be called Starflight III. All the ingredients that made the originals masterpieces are here: vast systems, many interesting aliens to meet and trade with, a cool underlying sci-fi plot, and strong underlying economic and flight models. There are many more minerals and exotic alien goods to trade than in the previous Starflight games, and the VGA graphics are generally well done (although the aliens look much less creative than Star Control games). Unfortunately, Protostar plays like a game that has been rushed out the door too soon-- the interface is not very user-friendly, and the plot (even with mixture of political intrigue thrown in) doesn't develop all too well. Although there are literally thousands of star systems you can visit, they all resemble each other after a while. The addition of different missions is a nice touch, but then again, the missions aren't nearly diverse enough. In the end, die-hard Starflight fans will probably feel a bit disappointed by this spiritual sequel that could have been a true winner with a bit more time in Q&A and betatesting phase to give it more polish. As it stands, though, it's still a fun "diamond in a rough" space trading game that's worthy of Starflight name, although not its masterpiece status. 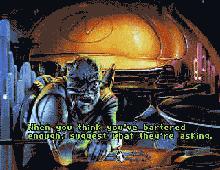